One of the greatest pleasures in life is relaxing at a café, sipping a caffeinated beverage and nibbling at a freshly baked dessert, surrounded by the aromas of roasting coffee and baked butter.

The ultimate expression of the coffeehouse is found in the beautiful cafés of Vienna, Budapest, and Prague. These establishments literally became second homes to the writers, artists, and celebrities of these cities, and embedded in Austro-Hungarian culture.

Coffeeandcake.org celebrates these legendary baked goods and teaches you how to create them in your own home. As the author of the best-selling book, Kaffeehaus, Rick Rodgers is uniquely equipped to share these iconic recipes.

While many of the classes will concentrate on the exquisite desserts of the Austro-Hungarian empire, Rick will also explore the cakes, tarts, and other pastries of the American diner, British bake shop, French pâtisserie, and Italian pasticceria.

Please join Rick for coffee and cake and bring a new world of baking into your kitchen! 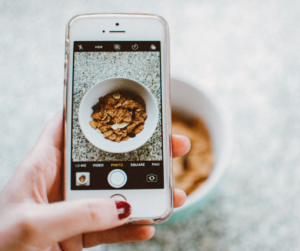 Purchase Videos of Past Classes 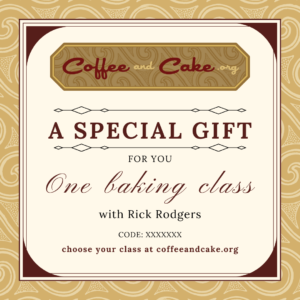 Internationally acclaimed, award-winning culinary teacher and cookbook author Rick Rodgers is renowned for his mastery of the extraordinary desserts of the Austro-Hungarian Empire and its satellite capitals.

The lively cafes and legendary bakeries of Vienna, Budapest, and Prague are rich in architectural scope, historic lore, and intricate techniques. This site, coffeeandcake.org is dedicated to teaching you how to recreate these famed baked goods in your own kitchen.

Bon Appétit magazine awarded Rick the prestigious Food and Entertaining Award for “Outstanding Culinary Teacher,” an honor he shares with only a handful of other educators, including PBS host Rick Bayless and Food Network’s Bobby Flay.

For more than twenty-five years, Rick’s immense popularity and magnanimous appeal brought him to sold-out classes in brick-and-mortar schools all over America, as well as to France and to Korea.

Rick enjoyed Viennese desserts at his family’s table, baked by his great-aunts from Liechtenstein, the tiny principality in the heart of the former Hapsburg Empire. Upon emigration to San Francisco, Rick’s aunties worked as bakers in private homes, and influenced their young grand nephew to become a chef.

Rick entered the food business at sixteen and holds a restaurant and hospitality degree from City University of New York.

The culmination of these professional and personal experiences resulted in the IACP-Award nominated Kaffeehaus, Rick’s cookbook that explores the coffee culture and desserts of Vienna, Budapest, and Prague.  As a cookbook coauthor, editor, and recipe tester, Rick worked with the best bakeries in the country on their own eponymous cookbooks. Rick’s numerous works include The Model Bakery Cookbook, Sarabeth’s Bakery, Tate’s Cookies’ Baking with Friends, The Baker’s Dozen Cookbook, Tea and Cookies, and Coffee and Cake.

A frequent collaborator with celebrities and corporations on his cookbooks, Rick wrote a dozen titles for lifestyle arbiter Williams-Sonoma. His books, The Chelsea Market Cookbook (with Michael Phillips) and Frankie Avalon’s Italian Family Kitchen won IACP and Gourmand Awards, respectively.

Many of you encouraged Rick to bring his skills into your kitchens. We invite you to join Rick as he inspires you to new levels of baking enjoyment and culinary taste sensations.

For more information on team building, group, or private classes, or to just say hello, please contact Rick with the form below.